You are here: Home1 / Blog2 / Author3 / Journey Into Insignificance 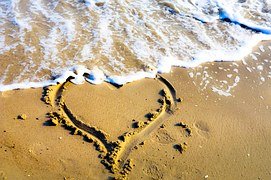 As I wandered along a beach, I looked. and I saw the beach that I was walking on. I saw the sand on the beach, and I looked and I saw my life as a single grain of that sand on which I walked. I was Insignificant. I was Nothing.

My vision became larger – as if I moved skyward – and I saw the beach in the context of the surrounding area, and it was but a small part of that area. How small, then, my life – my grain of sand.

I moved skyward, I looked down, and there was the nation spread like a map before me. I could no longer see the beach, for even it was now too small. How small my grain of sand. How insignificant.

I moved, I looked down, and I saw the earth as from space. A globe of beauty, but where was the nation? Where was the beach? Where was my grain of sand? I passed the sun, and the earth was now only a spot of light in the distance. Insignificant. Nothing.

Just then I felt a hand on my shoulder, and I looked around and it was Jesus; he said, “I made all this for you.”

Music of Your Life
Scroll to top
Loading Comments...